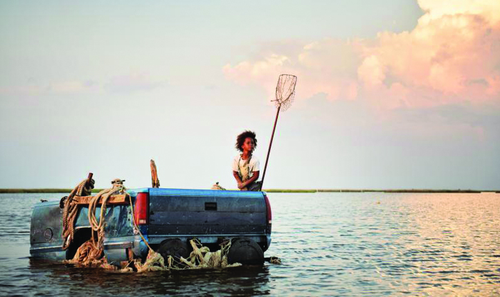 The Star card from the Raider-Waite deck.

Archetypal Tarot celebrates its 20th podcast! With some much needed respite after the tumult of the falling tower, Julienne Givot and Cyndera Quackenbush cozy up in some Dutch slippers and delve into the nourishing waters of the 17th card of the Major Arcana- The Star.

Picture the Fool (our Hero in this journey) laying on the grass in a field after the sudden liberation of the last stage. She is coming to and is not yet able to articulate what just happened to her. The symbols of the scene represented in the Star feature a naked woman who is both vulnerable and in harmony with the elements as she tends to what needs to be done.

Stripped of clothing (ego identity) and back down to the earthy basics, the beautiful maiden featured in this card helps us to replenish after a shock and (re)discover the true “guiding star” that will help us along on our journey.  We see the importance of humility to be open to true guidance.

Another potent symbol of this stage is water.  Water is often seen as a symbol of emotions and the unconscious which in this stage flows freely and the woman can been seen as a conduit for letting the waters flow back to their source as well as nourishing the ground.  The stars in the sky twinkle above clear and undeniably present, the Fool wonders how she never noticed they were there all along.

Stars have been the symbol of aspiration and guidance since ancient times from the three wisemen following stars to the mythic stories of Mithras.  Stars symbolize hope and to look up with an understanding that even we are connected to the stars.

This is a time after the storm where there is clarity. A recollection that grace need only be received and that the first stage of regeneration/rebirth is to be open to follow our true desire – what we are really on the journey for.  It’s interesting to note that the word desire itself comes from the old French “of the stars”.

Julienne discusses how the symbolism of the film Beasts of the Southern Wild relates to our taroic hero’s journey so far and Cyndera references the aspect of the Star in relation to Maidentrip, a documentary about a young Dutch girl who completed a solo around the world voyage on a sailboat.

“When it all goes quiet behind my eyes, I see everything that made me flying around in invisible pieces. When I look too hard, it all goes away but when it all goes quiet, I see they are right here. I see that I am a little piece of a big, big universe, and that makes it right.” -Hushpuppy, Beasts of the Southern Wild

Popular associations of the Star:

Helpful questions for this stage:

• What do I allow to guide me?

• What is the role of nurturing myself and others – is there an imbalance?

• How do I live the connection to nature?

• What can I do to allow more tranquility into my day?

• Am I allowing peace and relaxation to flow through my life?

• How do I acknowledge and take peace from knowing I am a little piece of a big universe?

Is it the Tower of Destruction or the House of God? In card number sixteen of the Major Arcana, we are met with yet another image that often inspires fear and superstition.
This is the first podcast in which Julienne Givot and Cyndera Quackenbush are divorced from their own tower (the recording studio) and explore this card’s symbolism from the telephone. With the sudden shock experienced in this stage of the fool’s journey, will those tethered to their addictions be struck from their habits? Does hitting rock bottom ultimately free us?
Cyndera explores how a client once completely dissembled her own psychic castle and Julienne reveals the qualities of the Liberator archetype. A closer look at current events and films such as the Hunger Games, Castaway and Groundhog Day also helps us all to “think outside the tower.” Also, don’t miss this podcast’s first homework assignment to watch Beasts of the Southern Wild through the lens of the Archetypal Tarot Journey.  We’ll be discussing it in the next edition along with the 17th card of the major arcana: The Star.
Details and references below.

Questions or suggestions?  Email us  ATPodcast@archetypist.com

Archetypes related to the Tower card: The Liberator

The Tower from the Marseilles deck

Popular Associations with the Tower Card:

Film references for The Tower Card:

Cast Away (2000) Tom Hanks – A FedEx executive is transformed physically and emotionally after a crash landing on a deserted island.

Film references for the Liberator archetype:

Religion/Myth: Milarepa – Buddhist Saint who had to rebuild a tower again and again as a part of his karma.