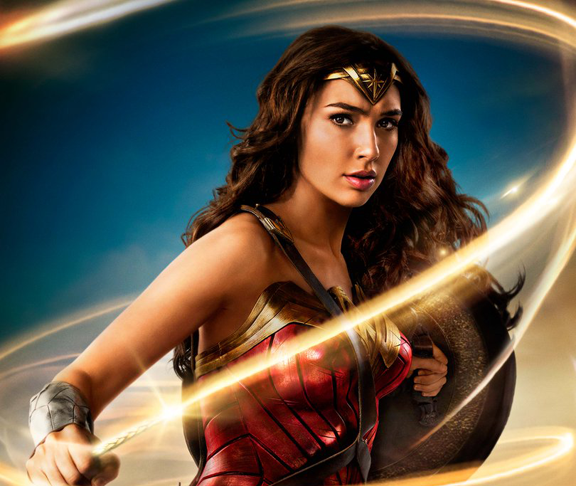 Cyndera and Julienne bring their provocative archetypal and tarotic insights into the new film Wonder Woman.  The archetypes in The Priestess, The Sun and the Chariot are at play in the film.   They also discuss how listeners can become a part of the Archetypal Tarot team by signing up to be a patron of the show.  https://patron.podbean.com/atpodcast

In an attempt to add a poster of Wonder Woman to my office, a new colleague of mine expressed her reservation to the addition of this image to the office environment, which, to her credit, did contain a speech bubble from Wonder Woman’s mouth saying “No Time for Naughty.”

She articulated: “I feel it’s important to celebrate real women, brave and courageous historical leaders who had an actual impact on the world.”

I felt as though wounded, as if a spear had gone straight through my heart, as if she was saying I
wasn’t real. Why on earth did I feel this way? Wonder Woman is not, in fact, flesh and blood, and I am certainly myself not Wonder Woman.

The poster did indeed stick out like a sore thumb on the wall, she did not match the drab green walls, the muted tones of the overhead file bins. Would my own personality clash as brilliantly as this to the work culture? Wonder Woman seemed protected in her plastic cover, the natural light causing her to emit an armor of reflected light. I was speechless, tears came to my eyes, I left early from my first official day, along with the poster.

Today, in Wonder Woman’s defense, these words have come me:

You speak of the courage of suffragettes, the immensity of emotion portrayed in Frida Kahlo’s artwork, but who would these women be without the forces that came alive within them. We speak of these forces in abstracted terms all the time – they are real and present even after each historical woman exhales her last breath – Courage, Leadership, Imagination, Vision. Fictional figures such as Wonder Woman, illustrate and actually embody these forces for us.

The gift of Fiction, the gift of art, that percolates through our culture in various guises – depicts for us these forces we hope to ourselves enact. We can celebrate the lives of historical women AND embrace the inspiration of of the figures of fiction – who try on possibilities, dreams and visions that our not-so-humble humanity has not yet dared.

Scientists look to science fiction for ideas of invention and innovation. Teachers and psychologists look to literature for an understanding of human behavior. Mathematicians have found formulas from their dreams (another source some may call “not real”)

“The Gods have not died, they have just gone underground.”

The forces within us are Real – Love, Hate, Courage, Passion, Intelligence. Allow us to celebrate and be educated by history and Imagination alike, for one teaches of the past the other of the future.

Since her creation, Wonder Woman has been resurrected many times, always reflecting the struggles of the age. Her tiara and dark tendrils rise again, along with a voice that is once again trying to be heard.

What do you believe in? What do you wish to stand for?
Do you act from Love or do you simply hide and take cover from fear?

Wonder Woman’s name is Diana Prince – Diana connects her to the name of the Roman Goddess of the Moon. Like the light of the Moon, her power is a reflected one and thus reminds us of REFLECTION – the power to look within yourself to see your own shadows and your own light. Prince – though she is a woman she also embodies the sacred masculine. She is in touch with her noble male capacities (the animus in psychology). And thus Diana Prince, Wonder Woman, is a marriage of opposites, the holding of a tension between differences, and thus a medicine for our deeply divided times.

Red, White and Blue are the colors of Wonder Woman’s classic costume. In one comic, she is actually dressed from a tattered American flag. Since WWII Wonder Woman has stood for what is noble about the United States, a symbol of liberty, justice and truth. She rises in the face of what is most ugly about our country, which has always been equipped with the teeth of greed, bigotry, narcissism and blindness.

Wonder Woman rises with only the weapons of truth, and her own strength to remind us of the hope we must not lose hold of. Hold tight to the Lassos of Truth! Feel the bondage of those bracelets encircling your wrists, reminding all deeds done by these hands to be for the liberation of self and others.

Feel the tiara, placed upon the crown of the head, framing the third eye of Insight, Intuition and crystallized concentration. Most of all, feel your heart, beating with life, beating with love for life bursting in each moment with your passion…

Sign up to be a part of the Archetypal Tarot Patron Team!  tiny.cc/tarot