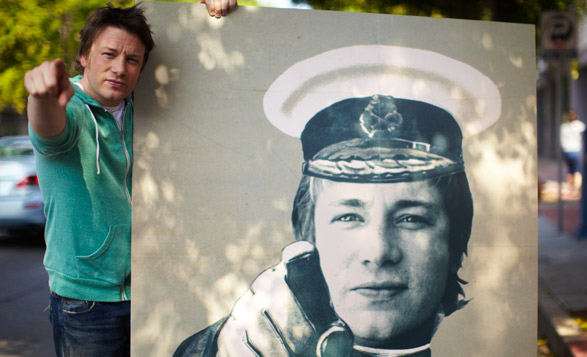 I haven’t found a more potent and exciting combination of the Hedonist and the Revolutionary archetypes than in Jamie Oliver (formerly know as the Naked Chef).   One of the the UK’s brightest culinary exports is  taking America by storm and I for one love him all the more for it.  He won the TED prize in 2010 and began by using his 100k grant to start a Food Revolution!. One year later his progress is stunning and includes a partnership with the American Heart Association and numerous thriving community projects. You can read more about it here at TED.com

Jamie is an archetypal Hedonist – he loves food – good food – nutritious and delicious food. He is rebelling against the status quo (Rebel) of processed food and unhealthy diets and is a Revolutionary leading a movement to change the way we eat, what we feed our children and how we treat food in general.  Watch his impassioned speech from the TED Awards and you’ll see this Hedonist/Revolutionary using his powers for good and not evil.

Jamie’s mad as hell that American children are being fed so poorly and he’s not going to take it any more!  This Food Revolution was televised last year on ABC and now can be seen online at Hulu.com. Besides being educational, the program was entertaining and engaging in a way only someone with a great deal of passion for change and a good bit of playful sensibility could.  Along with the Hedonist, Rebel and Revolutionary archetypes, I’ve observed the Divine Child, Father, Teacher and the Fool playing out in Jamie both on television and how he presents himself in his work.

“This Food Revolution is about saving America’s health by changing the way people eat. It’s not just a TV show; it’s a movement for you, your family and your community. If you care about your kids and their future, take this revolution and make it your own. Educate yourself about food and cooking, and find out what your child is eating at school. Make only a few small changes and magical things will happen. Switching from processed to fresh food will not only make you feel better, it will also add years to your life.” ~ Jamie Oliver

What is most exciting for me is that the combination of Hedonist and Revolutionary presents a deeply personal examination of both how we care for our health in terms what we eat and the pleasurable, social aspects of eating as a joyous and healing experience. Jamie is not the first Hedonist-Revolutionary however.  Alice Waters of the famed restaurant, Chez Panisse began her crusade decades ago and continues to revolutionize how we grow, cook and share food through her Chez Panisse Foundation and the Edible Schoolyard.

Hedonist (Related archetypes Bon Vivant, Chef, Gourmet, Sybarite) This archetype has an immense appetite for the pleasurable aspects of life, from good food and wine to sexuality and sensuality.   Indulging the self is central to the psyche of this archetype, whether treating oneself to a health spa or creating and indulging in delicious food.  The Hedonist celebrates life in all it’s pleasure, with joy and sensuality.  The shadow Hedonist may manifest as being self-indulgent without regard for other people or one’s own good health.
Films: Babbette’s Feast, Like Water for Chocolate, Big Night, Tampopo, 91/2 Weeks, Sex and the City 2
Fiction: Tom Jones by Henry Fielding; The Unbearable Lightness of Being by Milan Kundera; Les Liaisons Dangereuses by P. Choderlos DeLaclos.

Revolutionary This archetype of the Revolutionary is motivated to radically transform the conventional order. The  Revolutionary awakens consciousness and works for change in any area from politics to science, art and in the case of Jamie Oliver & Alice Waters, the way we view and consume food.  Revolutionaries are also inventors and business people who create and promote ground-breaking new products and services that create change. Director Lars von Trier and his Dogme 95 Collective are an excellent example of revolutionary ideas in action in the art of film making.
Films: Motorcycle Diaries, The Corporation,  V for Vendetta, Fahrenheit 9/11, Exit Through The Gift Shop, Star Wars (original trilogy), The Social Network.
Theater: Bertolt Brecht
Books: The Moon is a Harsh Mistress by Robert A. Heinlein, Dune by Frank Herbert, The Future of Revolutions: Rethinking Radical Change in the Age of Globalization edited by John Foran,