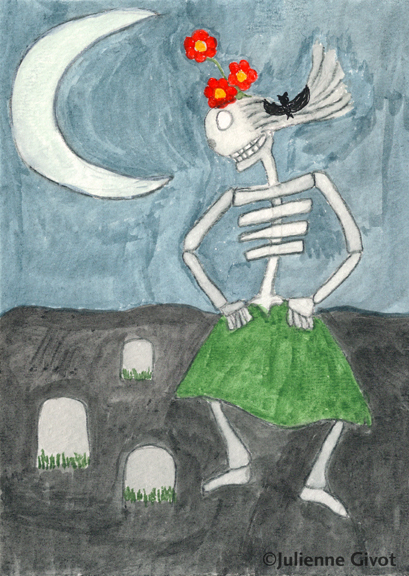 “We must let go of the life we have planned, so as to accept the one that is waiting for us.”   ~Joseph Campbell

Who knew that Death could be so funny?  But here it is, card number 13 in the Major Arcana.  Join Julienne and Cyndera as they look at the archetype of Death from a symbolic and psychological point of view with a dash of added humor. Learn why this inevitable stage for the Hero isn’t the end but an important element to the rest of the journey.

The Death card liberates all that has reached its end, and cuts away stagnation so that life can continue. Beyond the literal interpretation of this card, there is a rich array of deaths that visit in our daily lives: the end of jobs, relationships and also the visitations of depressions and other forms of “falling apart.” What advantages are there to dismemberment and disintegration?  How do Zombies and Batman play a role at exploring this the ultimate mystery of life – it’s end.  Or is it the end? You’ll just have to get the podcast and find out.

PS: Listen to all the way to the end for a surprise (and possibly a laugh or two).

Resources Mentioned in the Podcast:

“Yet through depression we enter depths and in depths find soul. Depression is essential to the tragic sense of life. It moistens the dry soul, and dries the wet. It brings refuge, limitation, focus, gravity, weight, and humble powerlessness. It reminds of death. The true revolution begins in the individual who can be true to his or her depression. Neither jerking oneself out of it, caught in cycles of hope and despair, nor suffering it through till it turns, not theologizing it – but discovering the consciousness and depths it wants. So begins the revolution in behalf of soul.”

~ from Re-Visioning Psychology by James Hillman

Tell a wise person, or else keep silent,
because the mass man will mock it right away.
I praise what is truly alive,
what longs to be burned to death.

In the calm water of the love-nights,
where you were begotten, where you have begotten,
a strange feeling comes over you,
when you see the silent candle burning.

Now you are no longer caught in the obsession with darkness,
and a desire for higher love-making sweeps you upward.
Distance does not make you falter.
Now, arriving in magic, flying,
and finally, insane for the light,
you are the butterfly and you are gone.

And so long as you haven’t experienced this: to die and so to grow,
you are only a troubled guest on the dark earth.