“I am myself” The Self Possession of the Virgin 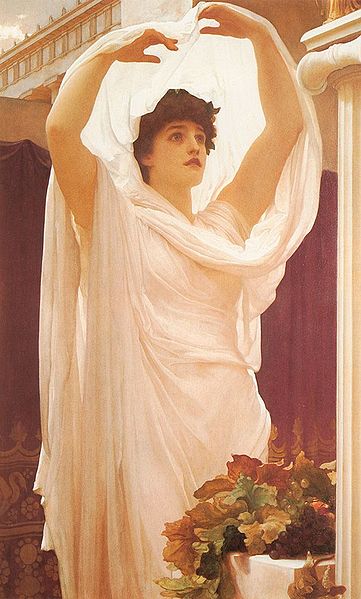 In his biography of Emily Dickinson, Alfred Habeggar describes a scene where Emily sits happily in the lap of a male acquaintance in the front room of her family home.  During her later years, she found pleasure in this man’s attentions long after mysteriously absenting herself from Amhearst’s social life and an almost complete inaccessibility to all but the most intimate and trusted friends and family.  We know her to be an eccentric and quite likely a virgin, yet this example contradicts all that we assume about virgins.  How can someone who rejects physical intimacy and normal human sexuality be comfortable canoodling with a widowed judge?  As well, there are many accounts of Queen Elizabeth I being overly demonstrative and affectionate with male courtiers and visiting dignitaries while also cultivating a reputation as the Virgin Queen.  Notes written in the private papers of her Council members and others close to her affirm their belief in her sexual inexperience.  The question bears repeating:  How can a virgin be at once physically inaccessible and sexually expressive?

Typically, a virgin is seen as one who cannot bear to be touched, inexperience, naive, and traditionally female.  These barriers to intimacy comprise an over-identification of the self with intangibles in an inviolable sense of purity, or the Damaged Virgin.  We see  similar expressions in ourselves when we recoil from an object that is unclean, like scrubbing a toilet on our hands and knees or laying flat on our backs to change the oil in a car.  Our wider culture has limited the state of the Virgin to the purity and separateness of her body, specifically the state of her hymen.  “Virgin” is often used in reference to an individual’s state of pre-initation before a particular experience (a vessel’s first trip is a “maiden voyage”).  This usage refers to a lack of experience in an individual or object, implying a transitional consciousness, a Before and After expression when looking back tat the event.

Unfortunately for the damaged virgin, very few people on this planet have arrived without the benefit of at least one person having an orgasm.  Sexuality and physical intimacy is an experience that all of us share in common, both in our own experiences and that of our forebears.  For some, engaging in a mutual sexual experience is the basis for expectation and ownership.  As the comedian Sommore says in The Queens of Comedy, “…you f*ck with me, you stuck with me.”  [Censorship added]  For much of human history, the act of marriage has transferred the exercise of a woman’s power of choice from her father to her husband,

demonstrated most visibly in the change of her name.  But in ancient Rome, when a girl was selected to enter the service of the Goddess Vesta, she escaped the common social practice of her culture and moved beyond the strict bondage of a male relative.  She was expected to remain celibate, (to be more specific, uninitiated in the ways of physical intimacy with a man) in her 30 years or more in Vesta’s service.  Serving the goddess effectively and exemplifying an unimpeachable character for Rome’s citizens required a great degree of training (education), consequentially enabling a personal mind,  her own view of herself and the world.  Whether she decided at the end of her term to remain within the Temple or to go out into the world and marry a man of her choice, in her late-thirties on, neither the Vestals’ mind nor body would be owned by husband, father, son or brother.

We can examine a virgin’s sexuality as a means of seeing this pattern symbolically:  Sexuality is a way of expressing a person’s accessibility .  Literally, a virgin’s crotch is closed for business.  We can say ‘access’ is also ‘proximity’  in that we often do not allow ourselves to be near certain experiences, ideas, and individuals.  When we hold ourselves apart from the truth, when we won’t allow certain people near us for whatever reason though simultaneously we long to be with them, we are expressing a damaged virginity.

The Virgin’s association with purity applies deeper than a physical condition and contacts an inherently internal intimacy.  This archetype enters our lives when we feel a need to draw inward, pursuing exquisitely personal questions that are commonly suppressed in the social expressions of ourselves.  In the doldrums of personal awareness we may not access others in the same ways we had before, lacking connection professionally, socially, sexually, and conversationally that were once so automatic and assured.  The Virgin can be seen as a gatekeeper of the spiritual path, an advocate for personal introduction.  But the expression of the Virgin as a spiritual mentor is temporary and wisely recognized as a pause for the sake of upgrading ourselves.   Once our lives open up again, we return in possession not only of new understandings, but of ourselves too.

More than a sexual experience with a cast of one (or for some of us, hundreds), this archetype contacts an outrageous expression of one’s personal identity.  “Outrageous” because this pattern has the potential to embody an inviolability that is independent of our experiences, lays beyond our physical location, is separate from our familial lineages.  Virgins contain a knowledge of themselves that can be seen by others, but never tainted, claimed, co-opted, or violated.  Going through the experience of isolation and self-focus earns the Virgin attributes that extend beyond any physical grasp.

One answer to the question how can a virgin be at once physically inaccessible and sexually expressive may be:

I am myself.  My body, my attention, my affections are all mine to share and intimacy at any level comes from me, not as a reward or certificate of ownership, but as part of that which I have to offer those of my choosing.