Part of us is grouchy and lives in Florida 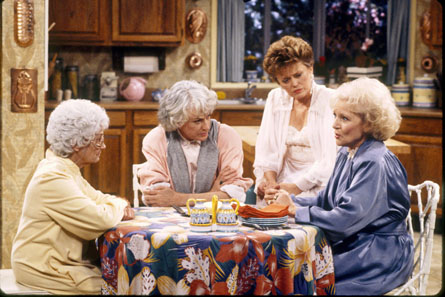 Understanding archetypes goes much deeper than a chat about a movie and beyond the confines of a psychology textbook.  An archetype is not just a pattern “out there” in theory but it is a recurring set of experiences that unfold through the course of a human life.  Our ability to spot when a particular pattern walks in the door makes the difference between acting out and making a conscious choice.  We begin to view the shape of our lives within an archetypal language by introducing ourselves to four patterns that we all share, the Survival Archetypes.  Let’s imagine that four well-known television characters become clothed for a time with each her own version of a pattern.   Rose, Blanche, Dorothy and Sophia share a home somewhere in Miami in the Emmy winning television sitcom, The Golden Girls.

This pattern and the next are the most obvious to match with characters from the show.  Rose captures the essence of the Child perfectly.  Her wide, gullible eyes lack any indication of doubt because she accepts anything an adult tells her.  The pattern itself balances innocence and responsibility.  Forced to make her way through life by her own efforts, Rose gathers herself up from a fantasy world where she is taken care of by her husband’s pension plan or a steady job and takes life on directly.  This is significant because the Child has to leave the safety of the family and enter a harsh world populated by sharply critical adults.  When we want to run away from a situation and deny what is happening, we are confronting the Child within us.  Yet this is also the pattern where we can choose to see each situation as overflowing with limitless potential and see things as new again.

Of course it’s Blanche.  In almost every episode, she decides to assign a value to her body by comparing her looks to another woman or using her body to advance her own interests.  At every turn Blanche is chasing a man or furious that her wiles haven’t produced the results she expected.  The Prostitute grabs a price scanner and makes its mark on every part of us it can so that we feel safe in the world, often by remaining in a relationship or a job.  Whenever she is confronted with a problem, Blanche throws on a negligee and adjusts her makeup in order to barter her way through.  She never fully believes in her own capacity to solve her problems beyond her salable attributes.  Only by the end of an episode does Blanche find what is truly valuable:   Her friendships and sense of herself beyond her outward appearance.

Dorothy is the “smart” one with the cold stares and the newspaper in her hand, ever expounding on the failures of society with its potential to violate and betray us.  It is her voice that speaks up after silently burning for a few moments, waiting for the assault to stop, and sets appropriate boundaries.  More than a few times Dorothy picks up a newspaper and hits Rose over the head when the St. Olaf stories go on too long.  This is the Victim, present when we feel unable to defend ourselves but also when we go after someone else for revenge.  Its empowerment isn’t in aggression and dominance but in being clear about our boundaries as they relate to who gets “in” as well as how far you get “out.”

Sophia’s entrance is often preceded by someone  starting to dream about a wonderful new idea or vision of themselves.  She shuts them down with a opinion based on how they will fail, often gouging out a chunk of self esteem in the process.  The Saboteur does the same.  Dorothy, for her part the empowered Victim, slaps her hand across Sophia’s mouth to prevent the impending criticism.  When you are about to make a choice that will interrupt a new opportunity for you to build self-esteem and connect to your destiny, the Saboteur has entered the room.  Through the entire series, Sophia exemplifies the Saboteur in her attempts to pursue a vibrant, active life for a woman in her eighties and confronts the view that she is hastening towards senility and the grave.  The ability to step into a new life for ourselves is guarded by the Saboteur, but make no mistake:  This is the pattern where WE are blocking our way forward, not anybody else.

Blanche: What do you think of my new dress? Is it me?
Sophia: It’s too tight, it’s too short and shows too much cleavage for a woman your age.
Dorothy: Yes, Blanche. It’s you.

Picture it:  One night you can’t get to sleep.  Something’s really bothering you at work or you’re ashamed of your bank account.  Maybe you’re not with the person you love anymore.  Whatever it is, you get up and shuffle into the kitchen.  Soon, you are surrounded by four of your lifelong archetypal pals, only they’re doing all the talking.  You sit there on the table while they pick at you, bicker and lay into each other with their concerns and fears.  Basically, you’re a cheesecake, slowly eaten away bite after bite.  Instead of becoming a pile of crumbs when these voices are in control, we can take the time to pursue a relationship with them.  We can know when we are making a choice that obscures or magnifies our destiny.  At first a silent partner, studying our deeper motivations, but in time we claim our place at the table.  Eventually, we will distance ourselves from their automatic choices and see what has been waiting beyond our fears in front of us the whole time.

More articles about the Survival Archetypes