An Artist Walks into a Monastery 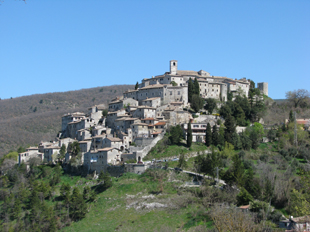 The still life of an Artmonk

How do archetypal motivations become passions that bring something new into the world? Sometimes one enriches another so much as to create a whole new experience. Inspiration is the deity of the Artist and contemplation the mark of the Monk/Nun. These two archetypes might not ordinarily be considered a natural synergistic match but in 2006, Bay Area artists Betsy McCall and Christopher Fülling began such an adventure in creativity and contemplation called The Art Monastery Project.

The Art Monastery Project is a contemporary experiment in social sculpture inspired by the tradition of the Monk/Nun: to apply the disciplined, contemplative, and sustainable monastic way of living to the creative process of the Artist.

Betsy and Christopher, along with a growing group of like minded ‘Artmonks’ embarked on a search for a location to put down roots for their project in 2007.  Europe is home to many monasteries and convents that now sit empty, virtually waiting for their next community to inhabit them.  After a search of over 25 different locations, they found their ideal home in the monastery San Antonio in the medieval hill town of Labro, 70 minutes north east of Rome, Italy.  The building dates back to the 17th century when it was a Franciscan monastery and now hosts the artists of the Art Monastery Project, as well as a world-class hotel and a restaurant.

This international group of multi-disciplinary artists seeks to create original, collaborative work and live together as an intentional community. The practices of the Monk not only serve the creative process of the Artist but also honor the community and environment in which they live.  The people of Labro have embraced being a part of this symbiotic relationship and are active participants in cultivating their town as a center of art and cultural tourism.

The guiding principles of The Art Monastery Project

Our world has been shaped by passionate people who reflect deeply about what they can give  and who embrace their full creative inspiration and dedication to manifest this insight into being. The Artmonks are passionate about artistic excellence, innovative spiritual process and the investigation into the nature and benefits of community living. They are open to new international collaborations as well as new community members. Local Artmonk groups are being formed all over the United States.

For more information on the Art Monastery Project, how you can give your support or even join in on the experience visit their website.  They also have a You Tube channel with videos of their stunning dance, music and other artistic productions.

Archetypes Defined:
The archetype of the Artist is marked by passion to express a dimension of life that is just beyond the five senses. The Artist psyche is animated with the energy to express it into physical forms. The nature or relative grandeur of any form of expression is irrelevant; a chef can be as much of an artist as a painter or landscaper. The signature of artists is not in what they do but in how intense their motivation is to manifest the extraordinary. Doing what you do in such a way that you create an emotional field that inspires others also indicates the Artist energy at work, as does the emotional and psychological need to express yourself so much that your well-being is wrapped up in this energy.

The archetype of the Monk/Nun is marked by intensity, devotion, dedication, persistence, and wisdom. On the shadow side, the role of a religious recluse could be seen as removed from the real world, overly pious, even privileged in the sense of not having to be concerned about earning a living or raising a family. Yet, historically, monks have been extremely industrious and involved in real-world enterprises, whether draining swamps and planting vineyards in medieval Europe, working the rice fields in Asia, building monasteries, teaching, or copying and preserving texts. Today the Monk archetype may show up in the ability to be single-minded, assiduous, devoted to a spiritual path or to any great achievement that requires intense focus. In this sense, novelists and entrepreneurs can carry the Monk as readily as spiritual adepts.